Home Downloads How to install Nvidia Drivers on Fedora Workstation

How to install Nvidia Drivers on Fedora Workstation The reputation of NVIDIA drivers is not a new concept to the world of operating systems. Experienced gamers will be quick to breakdown the properties and specs that made them go with these drivers. However, the experience provided by these custom-tailored drivers does not just side them with gamers alone but also DLCs (Downloadable Content) and patches for creative applications.

Therefore, a content creator appreciating creative workflows like live streaming, photography, video editing, graphic design, and animation will appreciate what the NVIDIA drivers have to offer.

Fedora workstation with an NVIDIA GPU stands to benefit from efficient scientific computation and machine learning operations. Moreover, other tasks like video editing or applications that require graphical processing, will soon fall in line.

Getting the NVIDIA Drivers Installed

We are going to take the bash command approach to install the NVIDIA drivers successfully. However, before this installation journey occurs, we will have to take care of some system configurations until after the driver’s installation completes, sit successfully. The first configuration to execute is stopping GUI from running. The second pre-configuration is to disable the nouveau driver. The nouveau driver is easy to disable. All you have to do is Modify the Grub Boot Menu.

The following are the learning objectives of this article.

# – If an empty instance of your terminal ends with this symbol, it implies that all the commands you will execute from this terminal need not have the prefix sudo, but you have to be a root user with root privileges.

$ – If an empty instance of your terminal ends with this symbol, it implies that the commands you need to execute from the terminal do not require root privileges. A regular or non-privileged user can comfortably adapt to this environment. However, using commands with root privileges will require the sudo prefix.

The output of this command includes specs like display resolution and memory of your NVIDIA graphics hardware. You should be able to see something like the following output sequence as part of executing the above command.

Make sure your Fedora system is fully updated by running the following command.

Since the command starts with sudo, you need to be a sudoer user or have sudo privileges as you will be prompted for an authentication password before the command executes.

To enable the RPM Fusion, you need to execute the following command sequences from your Fedora terminal.

The first command is for the free release, and the second command for the non-free release.

This step enables you to get and finalize the installation of the latest NVIDIA driver package into your Fedora system. However, you have three command options to work with, and you should choose the most relevant or related to your Fedora system needs.

Option 1: Execution command for the most recent GeForce

If you made it to this step, the installation of your NVIDIA drivers was a success, and the only thing left to do is restart your Fedora Workstation. If you want to take the Albert Einstein approach to install the NVIDIA drivers on your Fedora Workstation, this step is for you. However, this installation alternative is a fail-safe for the Fedora users that might face irreparable barriers with the RPM Fusion approach. However, this manual approach will get you the latest version of the NVIDIA driver, a case which is not promised under the RPM Fusion installation guide.

Make sure your Fedora terminal is launched and run the following command to identify your NVIDIA graphics hardware’s card model.

We might not have thoroughly explained why using this command under the RPM Fusion approach, but the explanation should make sense in this manual installation guide. The above command outputted several important parameters on our Fedora terminal, and we are going to carry them forward and reference them in Step 2.

Visit the official URL for NVIDIA driver packages and make the necessary drivers download. The site offers a search criterion from which you can input the parameters you found from executing the command in Step 1. Those parameters will enable you to get the most compatible NVIDIA drivers for your Fedora Workstation OS and your NVIDIA card model hardware. Alternatively, if you do not want to deal with these baby steps and tech-serve enough, the Nvidia Linux driver list is the place to go. Following this link will enable you to download the needed drivers for your Fedora Workstation directly. Your downloaded file should be similar to the following file syntax. 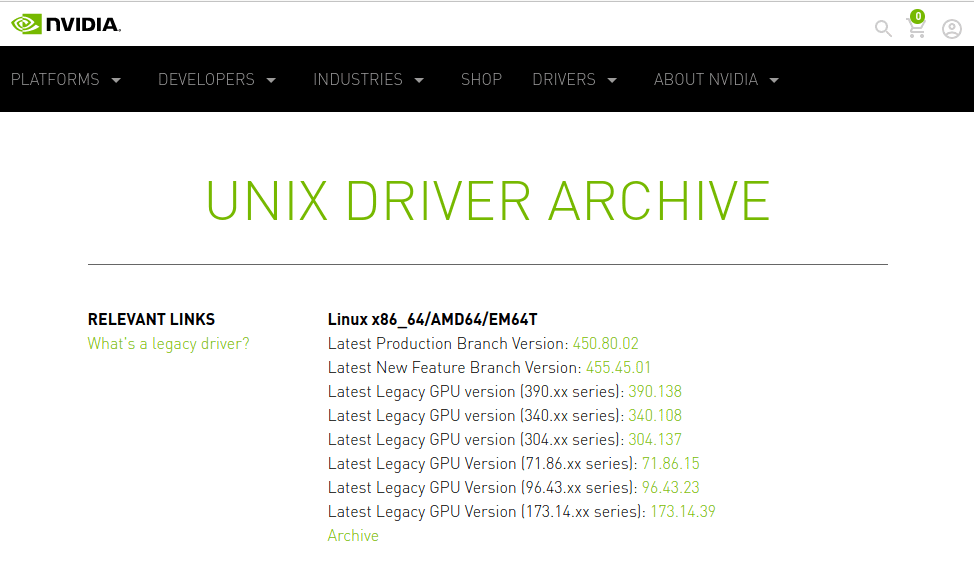 Here, we get to meet the objective of package prerequisites installations required for the successful compilation and setup of our Fedora NVIDIA drivers.

This step meets the objective of learning how to disable the nouveau driver. This modification is only viable through the GRUB boot menu. The following command will make the needed GRUB boot menu changes.

Time to restart your Fedora Workstation

This step may restart your Fedora system without a GUI. Therefore, it is advisable to enable the SSH server on your Fedora system for remote login. Alternatively, you could switch to the TTY console, enabling you to complete your NVIDIA drivers installation.

For you to successfully install the NVIDIA driver, the Xorg server should not be running. It is because it manages several graphical display instances of our Fedora Workstation, and being active might interfere with the installation of our NVIDIA drivers. You should be able to stop it by running the following command on your terminal. The command will take us from a GUI mode to a text mode.

Finally, the installation of the NVIDIA file you downloaded can be achieved by the following command. The use of either remote SSH login or TTY console will achieve the needed result.

You might receive a prompt request requesting permission to install some needed compatible libraries or the X configuration file’s automatic update. Respond with a yes. If you receive an error indicating that a kernel source tree cannot be found, then you should look for a guide to set it up.

Perform a system reboot for the second time.

Your Fedora Workstation should now be flourishing with an NVIDIA driver’s fresh install. You should perform a final reboot of your Fedora system. After you have signed in to your system, run the following command to access further configuration settings regarding your NVIDIA graphics card.

Finally, you can get your system back to its normal state by running the following command.

Your Fedora Workstation benefits a lot from the presence of both the NVIDIA hardware and software component; its compatible drivers. These drivers activate your NVIDIA-compatible hardware functionality and, in turn, improve the computational performance of your system. Be wary of the installation steps, and you will enjoy high computation power and graphics capabilities on your Fedora Workstation.

Great article. Saved me from many manual updates of nvidia drivers after each kernel update. Nice. Thanks.

Thank you, I am a bit of a Linux newbie and am installing Fedora 34 so I can experience Gnome 40. This tutorial has been a huge help.

did not work. says Nvidia kernel module is missing. Falling back to nouveau

Okay nevermind, I just wanna say thank you Brandon, I finally got it working. I found this note for those who are unable to get it working after looking in here.

We should also disable “Secure Boot” in BIOS as this one prevents loading custom modules.